We’re switching things up this week. The old Power Rankings rulebook is being temporarily thrown out because this season has become a little boring and why not.

The point of Power Rankings is to kind of guess and make predictions about what the Bachelor or Bachelorette is thinking on a week-to-week basis. But apparently, Des likes to speak in stream of consciousness and tell everybody exactly what she’s thinking the moment she’s thinking it. Soo, guessing is no longer necessary. Moral of this story? Des is a buzzkill.

But, we’re Bachelor Burn Book, so of course, we found a way to keep the party going. So, here’s what we’re gonna do:

We are going to give you five reasons why each guy from the top four (thanks for the rule of thumb, James) should become the next Bachelor and five reasons why he shouldn’t. Then, we’ll give you our highly-valued opinion on whether or not we think we can tolerate watching [insert name here] on TV for two and a half months. Everyone seems to be talking about who’s going to be the next Bachelor anyway, so we thought now would be the appropriate time to throw our two cents in. ABC/Bachelor executives: feel free to use this as a guide during this extremely important decision-making process.

Note: The guys will still be ranked according to the order that Des laid out for CH — just to keep a Power Rankings-ish feel to it. Also, we’ll briefly explain why they’re ranked where they are, just in case some of you were wasted or not paying attention (both very likely scenarios) these past two weeks. 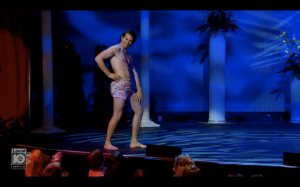 Our conclusion: Umm, obviously we do not think Brooks would make a good Bachelor. This show needs someone who is carefree, outgoing and willing to fall in love with like, four people at once. He has to throw his inhibitions to the wind as quickly as Courtney Robertson threw her clothes off to go skinny dipping.

And, most importantly, the Bachelor has to have hair that doesn’t even come close to resembling Ben Flajnik’s. Basically, Brooks is just too normal for the job. He’s cautious. He’s calculated. He actually, you know, takes time to fall in love. And this reality show just cannot have someone as realistic as that. Besides, we don’t really like Brooks, so that also probably has something to do with why we don’t want him to be the next Bachelor.

Our conclusion: We wouldn’t mind seeing Chris as the next Bachelor, but we’re not thrilled with the idea either. He is an incredibly genuine, humble guy, and he would have the best of intentions going into the process. We’re sure he’d be open to finding love and getting married and writing poems for all 25 women and … zzzzzzzz. Snoozefest. These are all wonderful qualities to have as the Bachelor, but he needs to be a little more … exciting. His good looks and genuine motives won’t be enough to keep us all entertained. Also, we just don’t know how much more poetry we can handle listening to … so there’s that.

Welp, by process of elimination, Drew ends up third. Des thinks he’s hot and she likes making out with him, but she’d still rather write a poem for Chris or catch a grenade for Brooks.

Our conclusion: Personally, we would love to see Drew as the next Bachelor, but we have to stop trying to make it happen. IT’S NOT GOING TO HAPPEN.

Bachelor Nation has made up its mind about Drew, and nothing is going to change that perception now. America has to love who the Bachelor is, and most people don’t love Drew. So, if we had to guess, ABC isn’t going to pick someone who’s ALREADY being made fun of. To choose a guy who they know upfront is a non-fan-favorite would be a disaster. Too bad though ‘cause he’s hot (Drew, hit us up aaaaanytime.)

Poor Zak. He was so sad. And to make things worse, ABC forced him to chuck a perfectly good ring out the window because Neil Lane called The Bachelorette execs in a fit of rage. It just didn’t end well for the kid. We do have some good news though…

Our conclusion: Ding ding ding! We have a winner! As you can see, we had a tough time coming up with reasons why Zak shouldn’t be the next Bachelor. So what if he has bags under his eyes and he has a horrible spray tan? Those things can be fixed. He would make an awesome Bachelor. He’s funny, goofy, carefree, genuine and just an all-around good guy. You know he’d make this next season an exciting one. Besides, we’d never run out of jokes to make with all the goofy shit he does. Important people within the Bachelor franchise, in case you’re reading, consider this to be our official nomination of Zak for Bachelor.

Who do you want to see as the next Bachelor? Leave us your thoughts in the comments section or vote in our poll, yo.