It’s getting down to the wire, folks! Well, not really. There’s actually like 11 guys left still. But it is getting down to a group of guys we actually recognize. The days of us frantically flipping through our notes to see if we wrote anything down on Anonymous Bachelorette Contestant #18 have passed, so now, we actually know who we’re making fun of. Oh yeah, that reminds us…

If you were one of Des’ early rejects who got less than six total minutes of airtime, we’re sorry if we said something about you that was rude, inconsiderate, insensitive, judgmental or the like. Blame the producers, not us. If they had given you more camera time, we could’ve made snarky comments that were a little more accurate. (Also, we’re only a little sorry, not super sorry.)

Anyway, Power Rankings, again. This is how it goes:

Every week, we’ll tell you who we think did the best, who did the worst and who got completely lost in the shuffle on the latest episode of The Bachelorette. We’ll rank (and kind of judge) the men based on their interactions with each other and with Desiree. Of course, we’ll factor in how we think Des views each of her suitors, as well. Just think of it as if we’re seating the men at the appropriate tables in the Mean Girls cafeteria.

Des totally loves Chris — not like love loves him, just loves him. Every time she’s with him, she gets all sparkly — not like Tierra sparkly, just sparkly. And every time Chris isn’t with Des, he turns into the male version of Taylor Swift and writes poems about his feelings. And then when he is with her, he reads said poem. Then, Des gets even more sparkly — remember, not the Tierra sparkly, just the regular sparkly. Clearly, they’re a match made in Bachelorette heaven.

Side note: Des’ often-sequined attire might be factoring in to her overall sparkly-ness, but it’s probably mostly Chris.

Well hello there, James! We never expected to see you up here! We’re glad you made it. Your one-on-one date with Des was very sweet — well, except for that whole “I once cheated on my girlfriend” thing. But that’s OK. We can forgive you. You were just a college freshman, and college freshmen are usually stupid. You may want to enjoy the view from up here in the top two though, because we’re not sure how much longer you’ll be staying. That whole “I’m gonna be the next Bachelor if I play my cards right” thing might not sit well with Des. If it turns out you’re a shady liar, then you’ll really be like Ronnie from Jersey Shore — in both looks and character. But hey, no worries just yet. We actually really like you … for now, at least.

Side note: If you’re a college freshman reading this, sorry. We know you’re not one of the stupid ones … because you’re reading Bachelor Burn Book. Duh.

Brooks is on a hot streak. He’s managed to make a fool of himself two weeks in a row. Last week, he busted up his finger while wearing unflattering athletic garb, and this week, he just pretty much did a bunch of weird stuff at the Mr. America Pageant. His pitiful attempt at playing the ukulele combined with his even more pitiful attempt at singing was just … we don’t even know how to describe it. There are no words. By the way, what the deuce was he even singing about? The song made no sense. We watched his routine like three times, and every time, this was our reaction: ???

Anyway, it doesn’t matter because Des loved it. She loves it all. She wants to mend his broken finger, laugh at his corny jokes and listen to his horrible singing all day, errday. So, good for you, Brooks. Keep being awesome/weird.

Zak finally managed to capture the elusive group date rose this week. He tried so hard week after week to get Des to give him that rose, yet every week, he came up short. He tried everything — talking to her, laughing, smiling, being nice, being sad — but nothing worked, until now. This week, he decided, he would sing a song to her … twice. As in, he performed a song for her on his guitar and then played the EXACT same song for her just a short time later. That’s like using the same pick-up line twice on the same girl. Except, for Zak, his pick-up line actually worked the second time around.

Bryden, why you gotta do us like this? What happened? Why you gotta be all perfect one week and then try to abandon us the next? You are cruel, Bryden. Cruel. Don’t toy with our emotions like that. You may as well just go! Leave now, before we become the next AshLee Frazier and start developing abandonment issues.

Clearly, we’re big Bryden fans, but he’s left us no choice. Jumping off the Bryden bandwagon in 3, 2, 1…

OK, we have finally made a decision about Ben. He’s not a villain. ABC has made him a villain. We’re just not buying into it. Let’s recap Ben’s “major offenses,” shall we?

Brought his son to the mansion on the first night: adorable

Got the First Impression Rose: so what, someone has to get it

Stole Des away for a ride in the Bentley: not breaking the rules

Tells Des to keep a lot of “secrets”: arrogant and dumb

Talked to Des in front of the other guys: OH, THE HORROR

So basically, we can conclude that Ben is kind of arrogant and dumb. Great. So are most of the other guys who come on this show. Therefore, we find Ben not guilty of being a villain.

Juan Pablo said during the Mr. America pageant that he wants a woman who’s a good dancer. We must admit, Juan Pablo, that we’re not the best of dancers. But we did make up this dance called “The Pants Off Dance Off.” Give us a call any time if you’d like us to demonstrate it for you. Any time at all, Juan Pablo, any time.

We’re going to tell you a story about a Michael that one of us was once in love with:

When we were very young, we frequently tuned in to the classic children’s show, Barney and Friends. And on this show, there was a little boy named Michael. If you’re not familiar with Michael, he was a stud.

Anyway, this particular Bachelor Burn Book writer pretend-married Michael and would often cook for him in her play kitchen. As she was cooking him a nice meal, Michael would misbehave and start climbing on the walls. So, because she cared for Michael, she would often yell (out loud … to an imaginary person), “Michael! Stop climbing on the walls! Don’t do that! Get down from there!” And Michael would then return to the dinner table and behave — until it was time for the next meal, of course.

So, what’s the point of this story? Well, unfortunately, we’re just not getting the vibe that Des cares for this Michael the same way that said Bachelor Burn Book writer cared for Michael from Barney. Des probably wouldn’t even tell this Michael to stop climbing on the walls. Tragic. Truly tragic.

Also, we’re not nearly as weird as that story makes us sound…

The producers clearly aren’t getting the memo here. Producers, pleeease put Drew in front of the friggin camera. Like now.

Also, a warning to you, Des. If you even THINK about sending Drew home, you will immediately become our least favorite Bachelorette. Like, you’ll be below Emily Maynard, so don’t screw this up! K, glad we’re on the same page. Love ya!

Kasey is just a dork. A total dork. If you win the Mr. America pageant, you’re a dork. Sorry, Kasey. We just call ‘em like we see ‘em.

One of our mothers’ thoughts on Mikey:

“So, this big douchebag comes out acting all emotional like, ‘Wahh, I’m not just a piece of meat. I have feelings too.’ And then he acts like a total meathead and turns upside his head like, ‘Look at me. Ohh yeah, I’m a big boy.’”

Right on, Mom. Right on. Always tellin’ it like it is.

Congratulations, Brad. You are one of the few contestants in the history of this show to be seen eating on a date with the Bachelor/Bachelorette. We love seeing people eating on this show. It’s like seeing a dog walk on its hind legs. 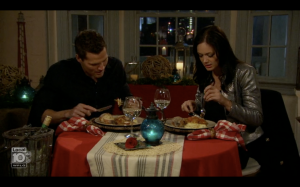 You should truly be proud of this major accomplishment.